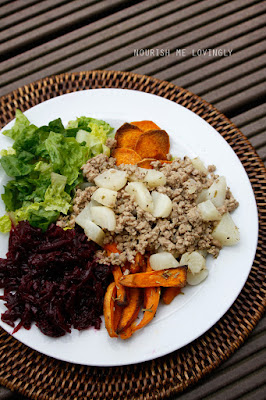 Easy minced dinner with cooked, roasted and raw vegetables for colour and flavour.

1. Melt the lard, add the finely chopped onions. Gently cook until translucent. Add the thinly sliced garlic and ginger, cook for a minute or two then add the minced venison. Stir to combine. Keep stirring until the raw colour turns into pale brown. Add the diced turnip. Season with the herbs, add a splash of water, cover with a lid, bring to the boil, then reduce to the minimum and gently cook for about 35 to 45 mins.
2. Peel the sweet potatoes. Cut one into thin slices and two into chunky fingers (or half sliced, or two sliced). Put them in separate bowls. Melt the coconut oil, drizzle over the potatoes. Toss to cover them with the oil. Arrange them on a baking tray (slices on one end). Sprinkle the chunks with the dried rosemary. Roast them at 175 C until edges are browned (slices will be ready sooner that the chunks).
3. Peel the beetroots and grate them (large hole). Season with the apple cider vinegar and the olive oil. Stir to combine.
4. Rinse the lettuce leaves, chop them roughly.
5. Serve the veg onto plates and top them with the venison-turnip mince. Enjoy!