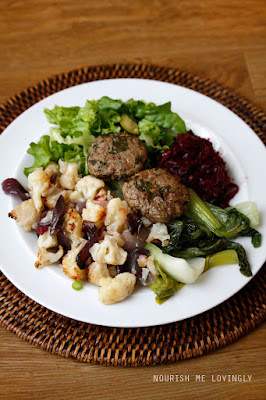 1. Put the peeled and roughly chopped onions, garlic, parsley, mint in a blender fitted with and S-blade and chop finely.
2. Put the onion mix and the chopped onion greens in a large mixing bowl, add the minced meat and combine well.
3. Add the melted coconut oil. Season with some salt (optional), dried oregano leaves and just a touch of cinnamon.
4. Take a small amount of seasoned meat mince (about a size of a medium-large egg), roll between your palms, flatten and place the patty on a baking tray.
Tip: I love my pyrex glass baking tray. If you have more trays those will save you time and you can bake them at one go. If not, then just bake them in batches, like I do. The first batch is for dinner, the second one is for freezing.
5. Put the tray in a preheated oven and bake at 180 C for until the patties start to form a brownish crust. Turn them and bake for 10 to 12 more mins.

1. Rinse the cauliflower and break into small florets. Put them in a mixing bowl.
2. Add the red onions (halves halved or quartered). Mix in the melted coconut oil. Combine well to cover the veg with the coconut oil.
3. Put the veg mix in a glass baking dish, arrange them in a single layer, and roast on 195 C for 10 to 15 mins, then on 165 C for 20 to 25 mins.

Rinse the pak choi. Cut the larger leaves in half, lengthwise. Put them in a wide pan, add the coconut oil with a wee splash of water. Cover with a lid and gently cook/steam until the leaves are softened.

1. Rinse the lettuce leaves, drain them well (use a salad spinner if you have one), roughly chop, and put them in a large mixing bowl.
2. Pit the olives, quarter the flesh and mix to the lettuce leaves.
3. Add the chopped onion greens, and drizzle with the olive oil. Mix thoroughly.

Tip: the SALADS are all VEGAN.