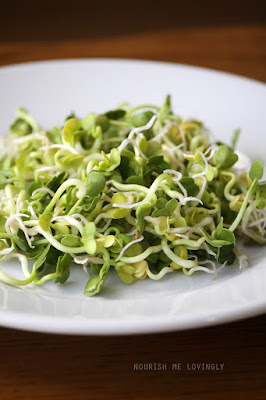 I have decided to sprout again. Many years ago (at least 15 or so) I was regularly sprouting seeds and pulses. I had a nice three-tier sprouting dish which worked really well, but it was made from plastic and as my awareness of clean food and better eating grew I have abandoned that handy little thing until I find a more suitable one i.e. glass or stainless steel. Well, I still haven't found one that does not contain plastic parts.
As spring came along I felt the urge again to sprout so I took one of my pyrex lids and started to sprout. 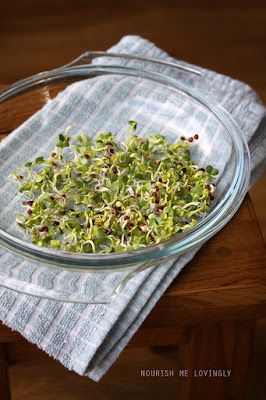 For start I have used radish seeds. I soaked them for 12 hours (according the packet) then laid them in the pyrex lid and washed them twice a day. They were slow at the start because they got dried up pretty quickly but I have figured it out that if I add a wee water for them to sit in it will do the trick. This first batch took me six days to sprout. Aren't they beautiful!?

When they were ready I have washed them in a big bowl of water, gently, to let the husk separate, drained the extra water and placed them in a glass container with a lid and put them in the fridge to keep them fresh to use in salads or garnish dishes. 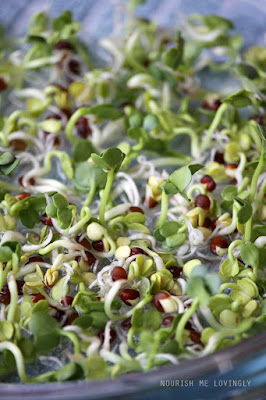