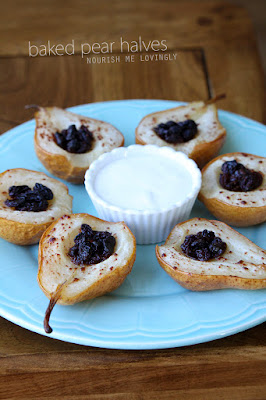 1. Rinse and soak the raisins for at least 2 hours but overnight is better.
2. Rinse the pears and cut them in half, remove the seeds with a melon baller.
3. Drain and rinse the soaked raisins, then fill the halved pears with them.
4. Melt the coconut oil and brush the stuffed pears generously with the melted oil.
5. Sprinkle the pears with a tiny bit of salt and some ground cinnamon.
6. Arrange them on a baking tray and bake in the preheated oven at 180 C for about 15 to 20 mins.

While the pears are in the oven prepare the yoghurt dip:
7. Put the yoghurt and the honey into a tall glass container and whip it into a fluffy cream with an electric hand held whisk.
8. Serve the pears warm with the sweetened yoghurt dip. Enjoy!