July in the garden 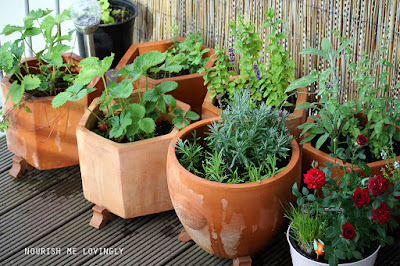 My little garden in July

Just over a year ago (end of May last year) I have started a small gardening project on my balcony (on the fifth floor at that time). There were six pots at the beginning, two of them I have planted with bought potted herbs (parsley, coriander and mint) and I have sowed four pots with rosemary, thyme, dill and more parsley and coriander (cilantro). My dill and coriander seeds were growing well last July, but the rest of the seeds were slow to catch up. The thyme was the third one to join the rapid growing but there were no signs of rosemary and lavender seeds coming to life. The chamomile wasn't successful either, only three plants grew into flowering stage and the flowers were barely enough for one cup of tea.

The parsley, the thyme and the mint have survived the mild English winter, fully occupying their pots. Surprise, surprise, the rosemary and the lavender seeds have changed their minds, after sleeping for a year they started to grow this June! Also some chamomile hung on from last year, again too few to make a decent cup of tea.

This year I have updated the herb selection and ventured into growing some fruits as well. I have invested in strawberries. The harvest wasn't much but is was ours, and it tasted better than the store/market/farm bought. 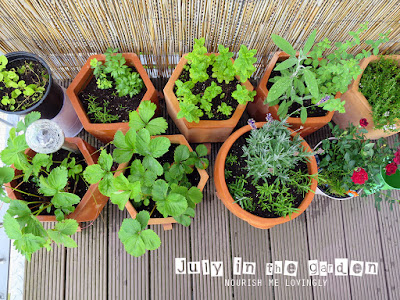 First row (from top left): The round black pot is planted with violet (I have found them by the road and took few tendrils home but only half of them survived), the first hexagon pot next to the violet is a mix of my sleepyhead rosemary seedlings occupying the bottom left corner of the pot, in the top left there are two rooted oregano sprigs, next to it is my regrow-project celery. The hexagon pot in the middle is the mint pot, next to it is the parsley (which is cut at the moment) and planted with potted sage and oregano. The hexagon pot in the top right corner is the thyme pot, still flowering. Second row: The first hexagon pot on the left is planted with strawberries, three 'Cambridge Favourite' variety and with one wild (Alpine) strawberry. The second pot is planted with thee more 'Cambridge Favourite'. In the big round pot there are my sleepyhead lavender seedlings (greens) and a potted flowering lavender (silverish leaves). In the last pot there is a dwarf rose sharing the pot with a nursery project, grass-growing (a sock filled with soil and lawn seeds).