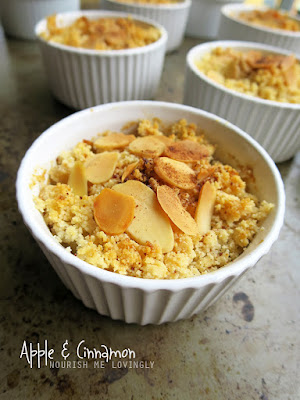 Ready the spoons for crumbly apple and cinnamon

1. Wash the apples and peel. Discard the core, then dice. Put apple into a pan, add a splash of water, the ground vanilla, and the coconut palm sugar. Bring to boil. Reduce to simmer, cover with a lid and gently cook for 8 to 10 mins. The water evaporates, the apple softens.
2. Fold in maple syrup and cinnamon.
3. Put ground almond into a bowl and rub in the coconut oil, until it forms a crumbly-like texture. Add xylitol. Mix thoroughly. 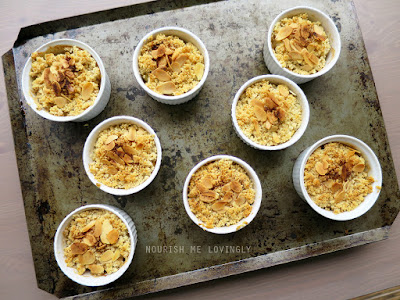 4. Place 8 ramekins on a baking tray. Fill each ramekin up to 2/3 with the apple and cinnamon mix.
5. Top each with 1 heaped tbsp of almond crumble, divide the rest evenly. Sprinkle with almond flakes and a hint of cinnamon.
6. Bake in a preheated oven at 180 C for about 25 mins. Serve hot with coconut whipped cream. Enjoy!

Allergy: Nut. No gluten. No dairy. No egg. No beet or cane sugar.

For GAPS: Omit the sweeteners OR replace them with honey. 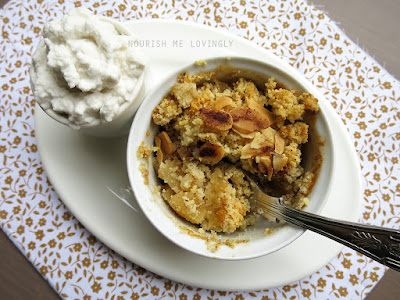 For the coconut whipped cream you will need:
1 can full fat coconut milk

1. Chill the coconut milk in the refrigerator overnight.
2. The next day gently remove from the fridge and open the lid. Scrape out the thickened cream on the top.
3. Place cream into a glass mixing bowl. Beat until creamy. Serve with your hot apple and cinnamon crumble.