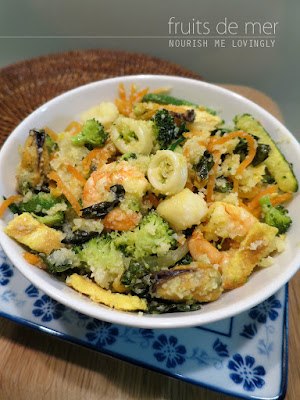 A hearty and luscious shellfish stir-fry

1. Crack one egg in a small bowl, season with a pinch of salt and freshly ground black pepper, and beat with a fork. Heat a small pan, add 1 tsp coconut oil and fry the egg crepe until the top sets then turn and fry the other side for a few seconds. Transfer to a plate. Beat the second egg, season and fry the same way. Keep the egg crepes warm between two plates.
2. Break up the broccoli into florets (save the stem and stalk to make veg stock later), cut the florets in half. Steam the veggies for about 4 to 5 mins. Set aside.
3. Heat the wok to medium. Melt 1 tbsp coconut oil. Pull the kale leaves off the stem and roughly chop into smaller pieces. Add the kale to the wok and toss until softened and starting to get some brownish color here and there. Remove to a large pyrex (to keep it warm). Wipe the wok clean.
4. Peel then quarter the onions, chop roughly or just leave quartered. Melt 1 tbsp coconut oil, add the onions and toss with two wooden spatulas for a minute or two, until some light browning appears on them. Transfer to the pyrex. Wipe the wok clean.
5. Cut off the ends of the courgettes, quarter lengthwise, cut out the seedy core (save them to make veg stock later or snack while you prepare the meal), cut into 2 inch batons. Add 1 tbsp coconut oil to the wok, toss the courgettes for 3 to 4 mins. Transfer to the pyrex. Wipe the wok clean.
6. Melt 1 tbsp coconut oil, toss the julienned carrots for a minute, add the steamed broccoli and fry for another minute or two. Transfer to the pyrex. Wipe the wok clean.
7. Break up the cauliflower into florets (save the stalk to make veg stock later), put the florets into a blender fitted with the S-blade, and chop until coarse and rice-like.
8. Melt another tbsp coconut oil, add the cauli rice, toss for a minute or two, cover the wok with a lid, reduce the heat, and cook for 3 to 4 mins. Transfer to the pyrex. Wipe the wok clean.
9. Bring water to boil and drop the frozen fruits de mer mix in and cook for 4 to 5 mins. Drain.
10. Melt the remaining tbsp coconut oil, add the thinly sliced garlic, ginger and turmeric, fry for a minute or two, until aroma released, add the cooked fruits de mer mix, fry for 2 yo 3 minutes to infuse the seafood with the aromatic spices.
12. Add the previously fried ingredients (waiting in the pyrex) back to the wok. Toss to combine.
13. Cut the egg crepes into stripes or ribbons and add them to the fried veg and seafood rice. Toss to combine.
14. Serve into bowls. Season with coconut aminos (optional). Serve hot. Enjoy!