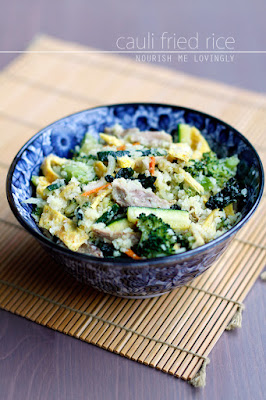 A big bowl of steaming fried rice, GAPS and PALEO-style

No rice? No problem, cauli is the new rice. This bowl of fried cauli rice is filled with veggies, some eggs and a bit of meat to keep you full for longer. 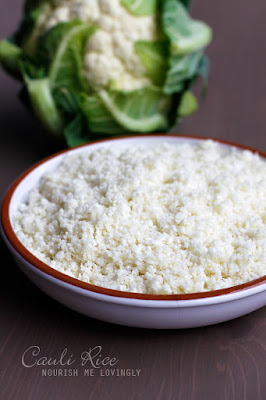 1. Pull the kale leaves off the stem and tear them into smaller pieces. Break up the broccoli into florets (save the stem and stalk to make broth later), cut the florets in half. Steam the veggies for about 5 to 6 mins. Set aside.
2. Break up the cauliflower into florets (save the stalk to make broth later), put florets into a blender fitted with the S blade, and chop until coarse and rice-like.
3. Beat one egg with a fork, season with some black pepper and ground turmeric. Heat a small pan and fry the egg crepe until the top sets then turn and fry for a few seconds. Transfer to a plate. Beat the second egg, season and fry the same way. Keep the egg crepes warm between two plates.
4. Prepare the courgettes: cut off the ends, quarter lengthwise, cut out the seedy core (save them to make broth later or snack while you prepare the meal), cut into 2 inch batons. Cut the onions in half then slice them thinly.
5. Heat the wok to medium. Melt 1 tbsp coconut oil, add the thinly sliced onions and toss with two wooden spatulas for a minute or two, until some light browning appears on them. Set aside.
Tip: To keep the onions warm, put them in a large pyrex with a lid. 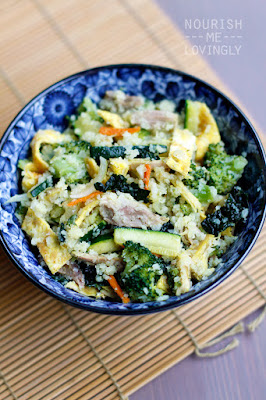 Tip: Season your bowl with few drops of sesame seed oil and a bit of coconut aminos, if you fancy.

* I believe this meal serves 4 people but me and my three years old ate it all in one go, the three years old eating the half of it, which means it is really REALLY good!